Loveland Fire Rescue Authority (LFRA) has named Tim Sendelbach as its new chief. He takes the helm on Oct. 4.

“Chief Sendelbach comes to LFRA with a proven track record of integrity and quality leadership. He is internationally known for his skills in fire management, education, problem-solving, and leadership,” said LFRA Board Chairman Jeff Swanty. “LFRA and the Loveland community are most fortunate to attract a fire chief with his qualifications and background.”

Most recently, Chief Sendelbach served as an assistant fire chief with the Kingman Fire Department in Arizona. He brings 35 years of extensive leadership experience serving as a fire officer across seven states and through the private sector as a senior executive.

“Accepting this position with LFRA was an easy choice for me. My goal when I began my career in the fire service was to be part of a progressive organization that exemplifies excellence – one where I could lead a dedicated team to strive for continued improvements,” said Chief Sendelbach. “LFRA has built a solid foundation already, and I look forward to leading this team to build upon that.”

In addition to his on-the-job experience, Chief Sendelbach is known for his extensive industry leadership. He is a past president of the International Society of Fire Service Instructors and is a credentialed chief fire officer and chief training officer with the Center for Public Safety Excellence. In 2007, the chief presented the keynote address at the Fire Department Instructors Conference in Indianapolis. He was also selected to serve on the City of Charleston Post-Incident Assessment and Review Team following the tragic loss of nine firefighters in the Sofa Superstore Fire.

“The Loveland location was a big draw for me – both for the access to the outdoors and the fact that I am joining a department that values strong leadership. I’ve known former LFRA Chief Miller for years and see the great work being accomplished. I can’t wait to get to work,” said Sendelbach. 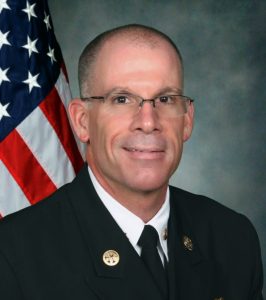