Home/Uncategorized/Loveland Cracking Down on Illegal Fireworks
Previous Next

Loveland Cracking Down on Illegal Fireworks 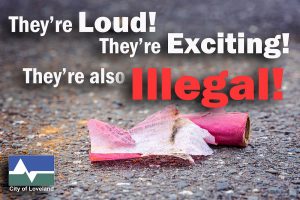 Like most Americans, Loveland residents celebrate the Fourth of July with picnics, parties and sometimes, illegal fireworks.

Illegal fireworks such as bottle rockets, cherry bombs, morters, M-80’s and Roman candles, send pets running for cover and exasperate neighbors. They can also cause serious eye injuries, severe burns to hands and faces, and worse. They can be profoundly disturbing for veterans or anyone suffering from Post Traumatic Stress Disorder, and on top of that, pose additional fire danger in our already arid landscape.

Due to the concerted effort by the City Manager, the Loveland Police Department and the Loveland Fire & Rescue Authority want to inform people that illegal fireworks in Loveland are considered highly dangerous and a major safety concern, and the Court believes the maximum fine of $1,000 or $500 is appropriate.

The Court will not authorize a payment plan and the entire amount is due at the time of conviction. Between the cost of the fireworks, the cost of gas to drive to another state to buy them, a $1,000 fine and criminal conviction, the decision to have illegal fireworks in Loveland can be a very expensive decision.

Because the use/possession of illegal fireworks carries jail as a possible sentence, appearance in court is mandatory and failure to appear will result in an arrest warrant.

The risks aren’t worth it, so please don’t use illegal fireworks.